Focused on Safeguarding Your
Intellectual Property
Contact Us for a Consultation
Home
About Us
Evan Chavez Esq. 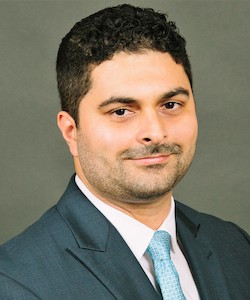 Evan Chavez joined Milord Law Group after working as a Trademark Examining Attorney with the United States Patent and Trademark Office. His experience with the USPTO and a background in litigation form the basis of his practice. He firmly believes innovation, creativity, and entrepreneurship deserve proper protection and fierce advocacy.

Evan received his Juris Doctor from Tulane University School of Law where he cultivated a passion for intellectual property law. While participating in a Trademark Clinic with Carver Darden, LLC, he held roles as a Senior Notes & Comments Editor for Tulane’s Journal of Technology and Intellectual Property and President for the Technology & Intellectual Property Society and the Tulane Entertainment & Arts Law Society. He benefitted from his selection for the Hispanic National Bar Association and Microsoft’s Intellectual Property Law Institute in Washington D.C., and his selection as one of twelve diverse law students to compete in the inaugural Shook, Hardy & Bacon LLP’s Scholars Institute. He also volunteered at the ELLA Project providing legal aid for businesses and individuals intimately tied to New Orleans culture. Despite no longer working on Frenchmen Street, Evan is always happy to discuss the best spots for live music and po’boys.

While his approach is personal, Evan understands the global reach and impact of intellectual property. He worked on infringement liability for third-party platforms in various countries during an internship with the USPTO Office of Policy and International Affairs. Sometimes what appears as untenable differences between parties and cultures may actually have surprising alternative resolutions which Evan explored in mediation and negotiation programs at the Humboldt University of Berlin.

Before law school, Evan attended the California Institute of the Arts and experienced firsthand the time, effort, and focus required for art in all its forms and production. Equipped with an MFA in Creative Writing from CalArts and a B.S. in English from the University of California, Irvine, Evan taught high school in South Los Angeles. During his transition from the classroom to the courtroom, Evan has maintained his love for creative writing, oil and acrylic painting, reading (James Baldwin, Ngugi wa Thiong’o, and Roberto Bolano are his current favorites), and sports his wife insists he should be watching instead of playing, primarily rugby.

M.F.A., California Institute of the Arts

Contact Us
Practice Areas
Client Reviews
★★★★★
Milord is not only our attorney, but he has become our valuable business advisor. David Louie, Arkivio
★★★★★
Best experience ever. They have a lot of experience and get down to business for you. I highly recommend this firm for any Trademark cases. Thank you for saving me. Isaac Esrailian
★★★★★
Very friendly and helpful people. I would recommend them to any one. Donald T.
View More
Submit a Law Firm Client Review