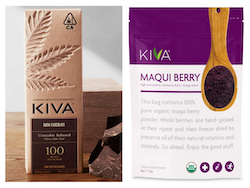 The lawsuit began when Kiva Health Brands (KHB) believed its customers were confusing its products with Defendant Kiva Brands, Inc.'s (KBI) products. On April 15th, 2014 Plaintiff KHB registered its KIVA trademark with the US Patent and Trademark Office (USPTO) claiming use as early as 2013 on natural foods and health supplements, including California sales.

Defendant KBI manufactures and distributes its KIVA branded cannabis-infused chocolate and other edibles in California. KBI registered its KIVA mark only in California on January 30th, 2018. It claimed senior or prior common-law rights in California arising from its in-state use of the mark beginning in 2010, i.e., before KHB began marketing its products there.

The first question the Court considered is whether KHB or KBI owned the KIVA trademark. KBI admitted that KHB, by virtue of its federal registration, owned the mark in the rest of the country, limiting its claim to ownership to California. KBI relied on its use of the KIVA brand name in California before KHB entered that market.

The Court decided it didn't matter that KBI had been using the KIVA trademark longer than KHB in California because KBIs use was illegal under the Controlled Substances Act. Therefore, KHB owned the trademark.

Fortunately for KBI, that wasn't the end of the matter. The next question for the Court was whether it would be confusing for consumers to have two companies selling KIVA branded products. If the court deemed confusion among consumers was likely, KHB would win because it asserted that confusion would damage its business and IP rights.

KHB made strong arguments that customer confusion would be likely because both companies manufacture and distribute food products. KHB added that its business would suffer from confusion because its health-conscious customers would not be happy if they thought the company had started selling cannabis products.

Courts use eight factors when considering if consumers are likely to be confused by similar trademarks:

KHB won the arguments on factors 1, 2, 5, 6, and 8, but it was close on the last three. The Court acknowledged KBI wasn't trying to fool anybody by using the word KIVA, so score factor 7 for the Defendant. It decided factor 4 wouldn't cause confusion because the companies advertise to different groups of consumers, KHB to healthy lifestyle enthusiasts and KBI to cannabis users (people the Court didn't seem to think would be health conscious).

The Court decided that the most important factor in this case was that customer confusion between KHBs health and wellness products and KBIs cannabis-infused treats simply was not possible because KBIs products can only be bought through state-licensed dispensaries and delivery services.

Therefore, the Court found that KHB did not demonstrate it was likely to succeed at trial and denied its motion for an injunction. This case is good news for recreational cannabis product sellers whose trademarks are inadvertently similar to a company in a more traditional business. An exception would be if a recreational cannabis producer selected a trademark similar to an existing trademark on purpose or chooses a famous trademark that is likely to cause dilution or tarnishment of the famous trademark.

This case isn't helpful for manufacturers of hemp or cannabis-based beauty products, including those with tetrahydrocannabinol (THC) content less than 0.3%, (skincare products and cosmetics are examples), because those products are available in the same stores as products that don't contain cannabis extracts. In those cases, similar trademarks would be more likely to confuse consumers due to physical proximity of trade channels.

The issues decided in that case are technical and are important for cannabis companies to consider in selecting trademarks. It is a reminder that fighting out a case in court is time-consuming and expensive with an unpredictable outcome. Thus, it's better to consult a trademark attorney early in the trademark selection process to avoid the pitfalls of a trademark infringement lawsuit.

Contact Us
Practice Areas
Client Reviews
★★★★★
Milord is not only our attorney, but he has become our valuable business advisor. David Louie, Arkivio
★★★★★
Best experience ever. They have a lot of experience and get down to business for you. I highly recommend this firm for any Trademark cases. Thank you for saving me. Isaac Esrailian
★★★★★
Very friendly and helpful people. I would recommend them to any one. Donald T.
View More
Submit a Law Firm Client Review